I got this steering damper from eBay. Nice price and seems like it’s well made. Fitted it today and after a bit of adjusting it works just great. It makes the bike feel a lot more solid and stable, especially when powering out of corners on bumpy roads 🙂 After a lot of messing about to get the almost unobtainable 70mm caliper mounting bolts I have finally got them and installed the disc! A quick ride with the stock pads revealed that the braking is improved and that the ABS sensor was rubbing on the ABS ring. A thin washer to space out the sensor and all is well. I have since fitted the EBC HH pads, but it was raining, so haven’t had a chance to test yet. Looks neat! After I had ridden the new 2017 KTM Duke 390 I decided that I wanted a better front brake, like the new one has. The KTM power parts upgrade was around US$500 which I found excessively expensive. I found out that it’s not actually made my KTM, it’s made by Galfer. The cheapest I could find that brand for was US$250, still too expensive. I found one on Aliexpress for US$75 and it has arrived. The only problem I have now is sourcing the extended caliper mounting bolts and spacers so I can fit it. The bolts are an unusual size, M8x1.0 pitch 70mm long with 30mm of thread. The disk supplier said he was trying to get them for me, then I had no contact with him for a few days. I’ve tried to buy locally, but no-one has them. Today the disk supplier contacted me and said he has the bolts and spacers, so now I’m waiting for him to list them so I can actually buy them! I picked these up from a supplier in India, ViaTerra. Great quality, but the freight cost more than the product! They did come DHL in less than a week though. I’ve been thinking about a set of after market decals, but then I saw this and quite like the minimalist look. 1st service now done and I have added more bling. I picked up a nice new front headstock stand for my KTM from Trademe. Works a treat! I fitted a tank protector decal too 🙂 I got these nice CNC spools or bobbins or whatever the proper name is. Looks much better without that ugly slab of plastic that was the rear mudguard. Got this one from R&G Racing in the UK. I ordered it on a Thursday night and it arrived the following Monday! Awesome service! 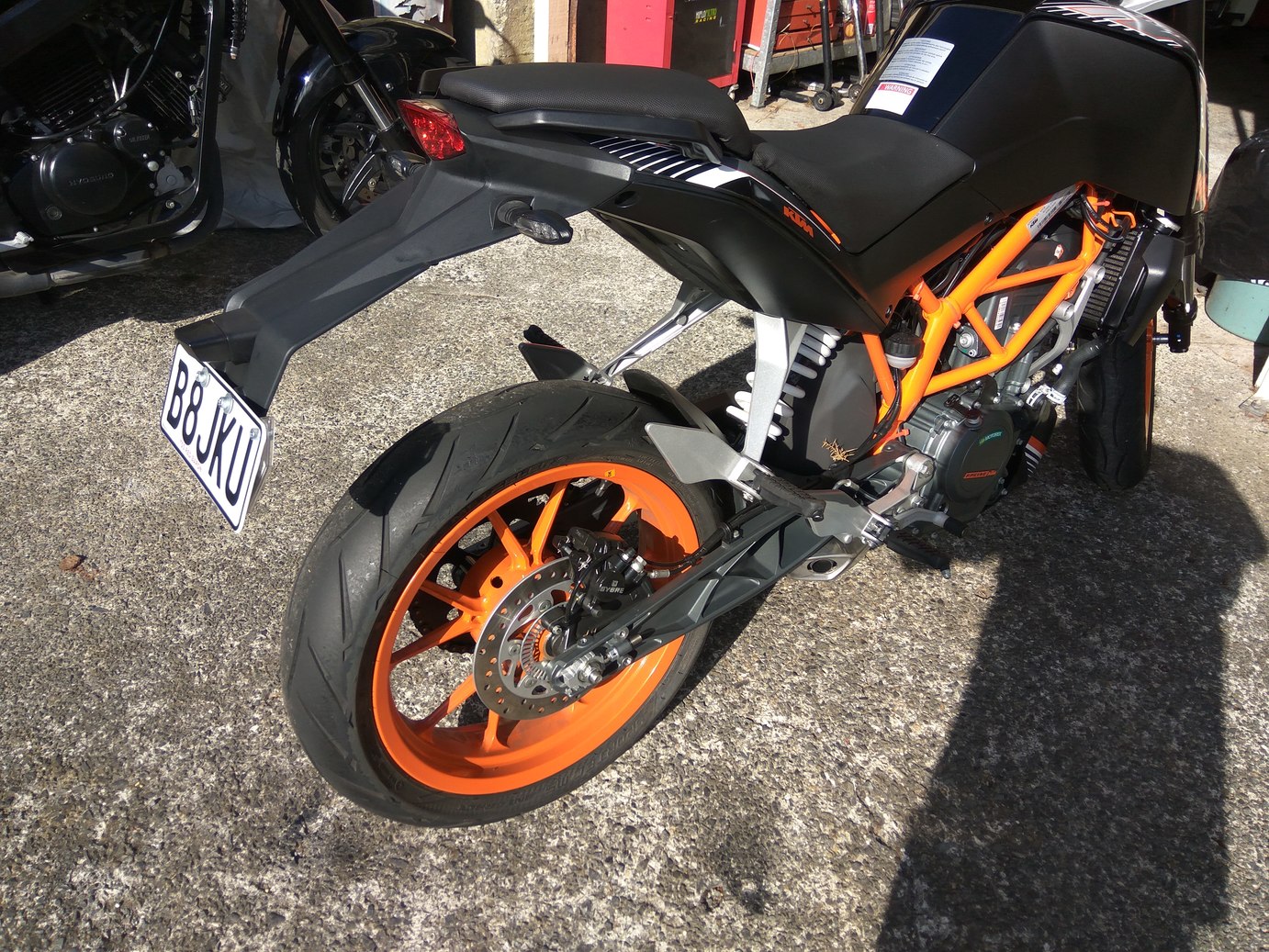 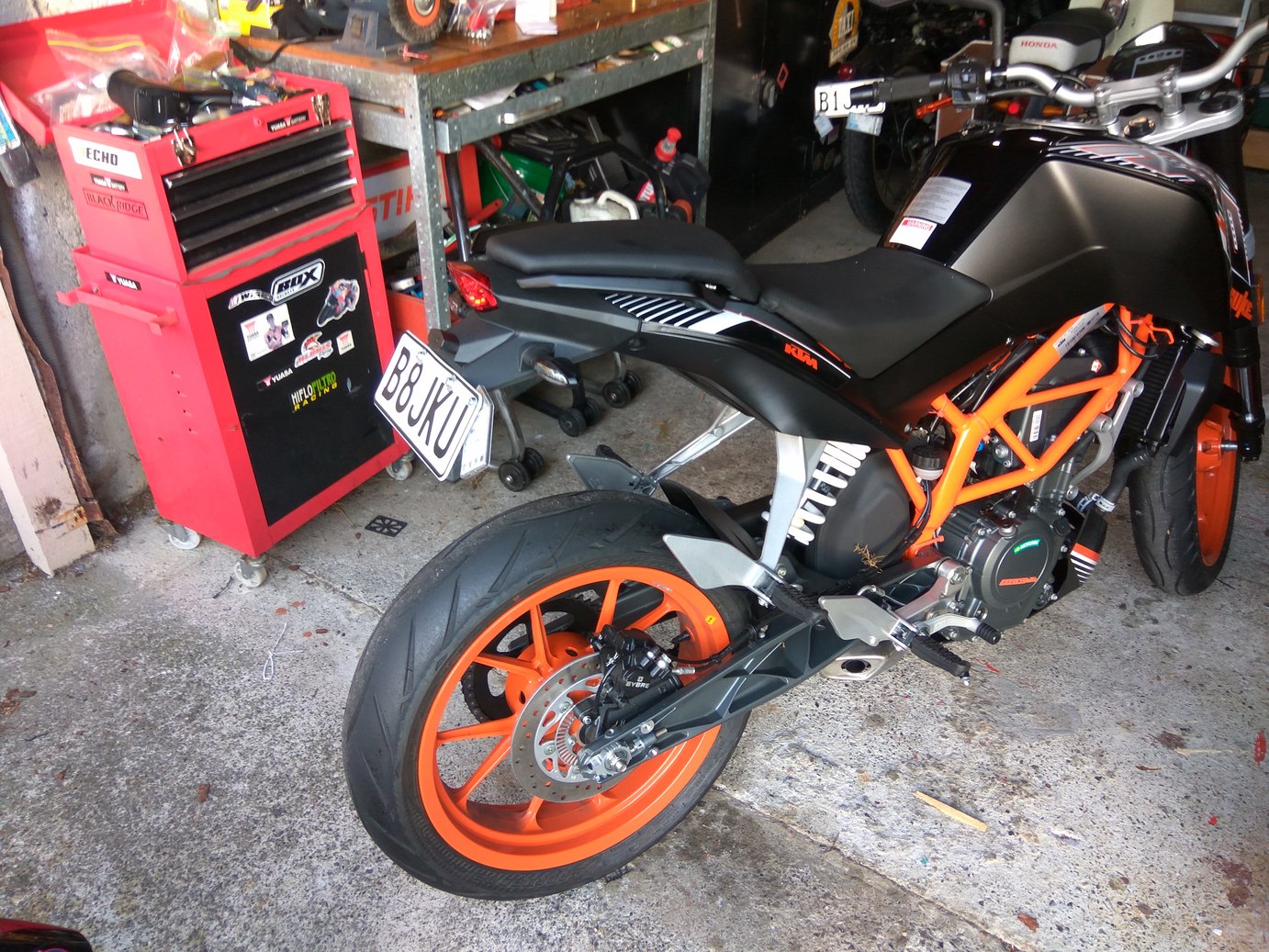 Got these bad boys from Aliexpress, very nice and fit perfectly. 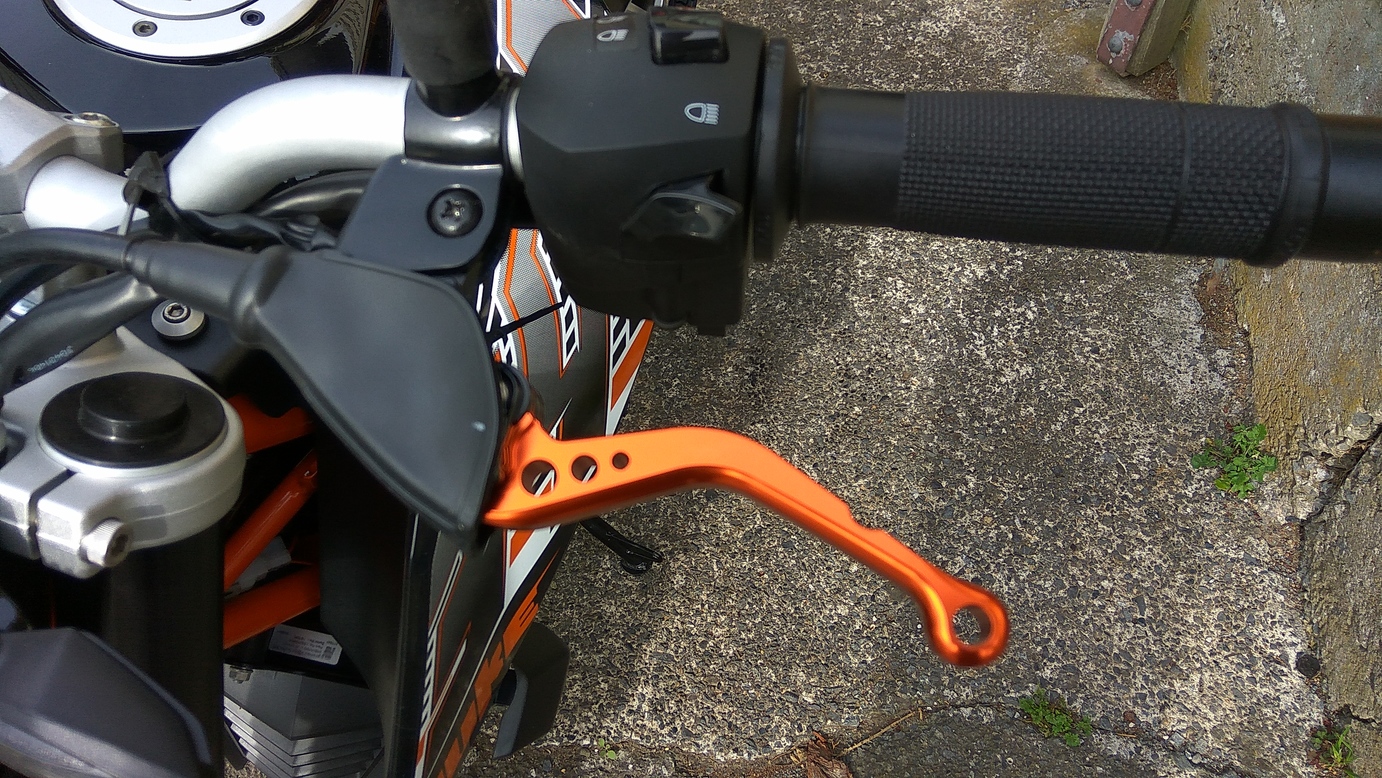 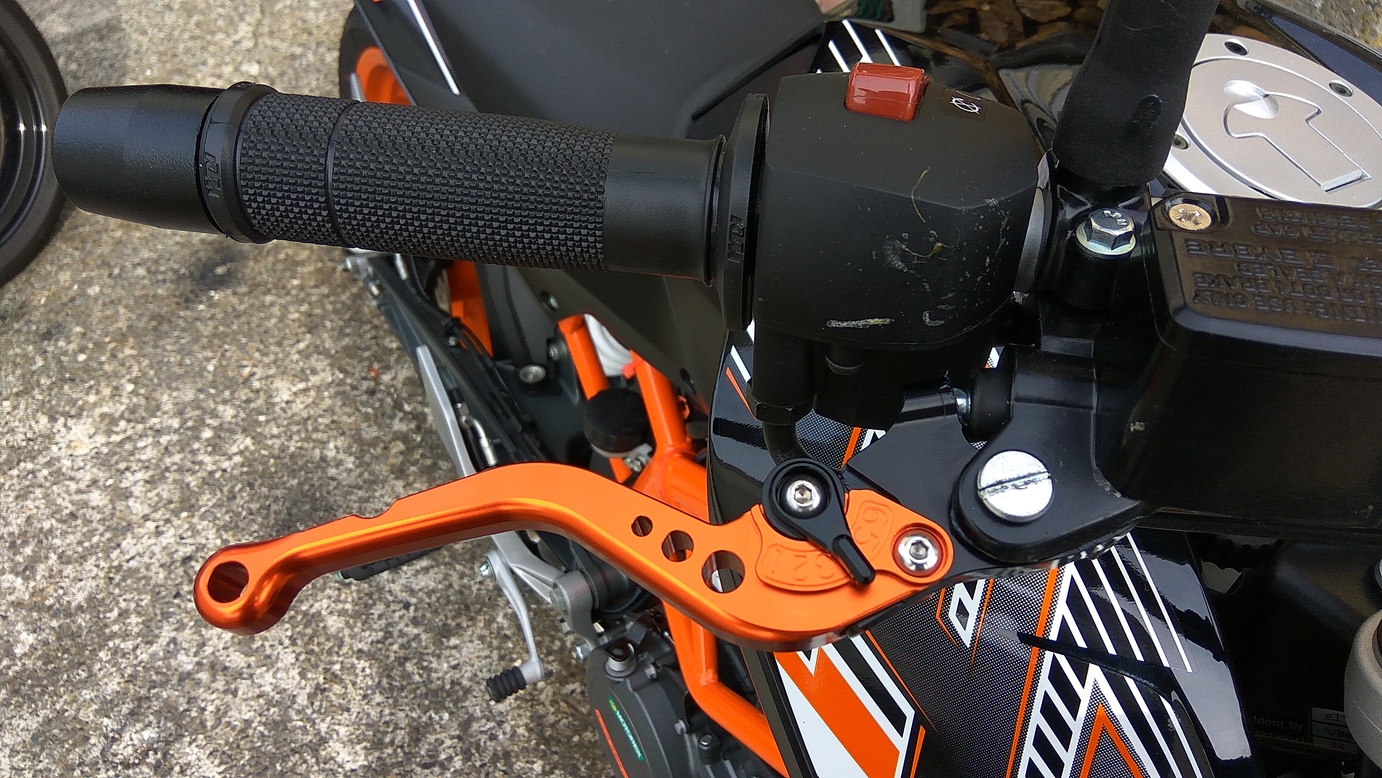 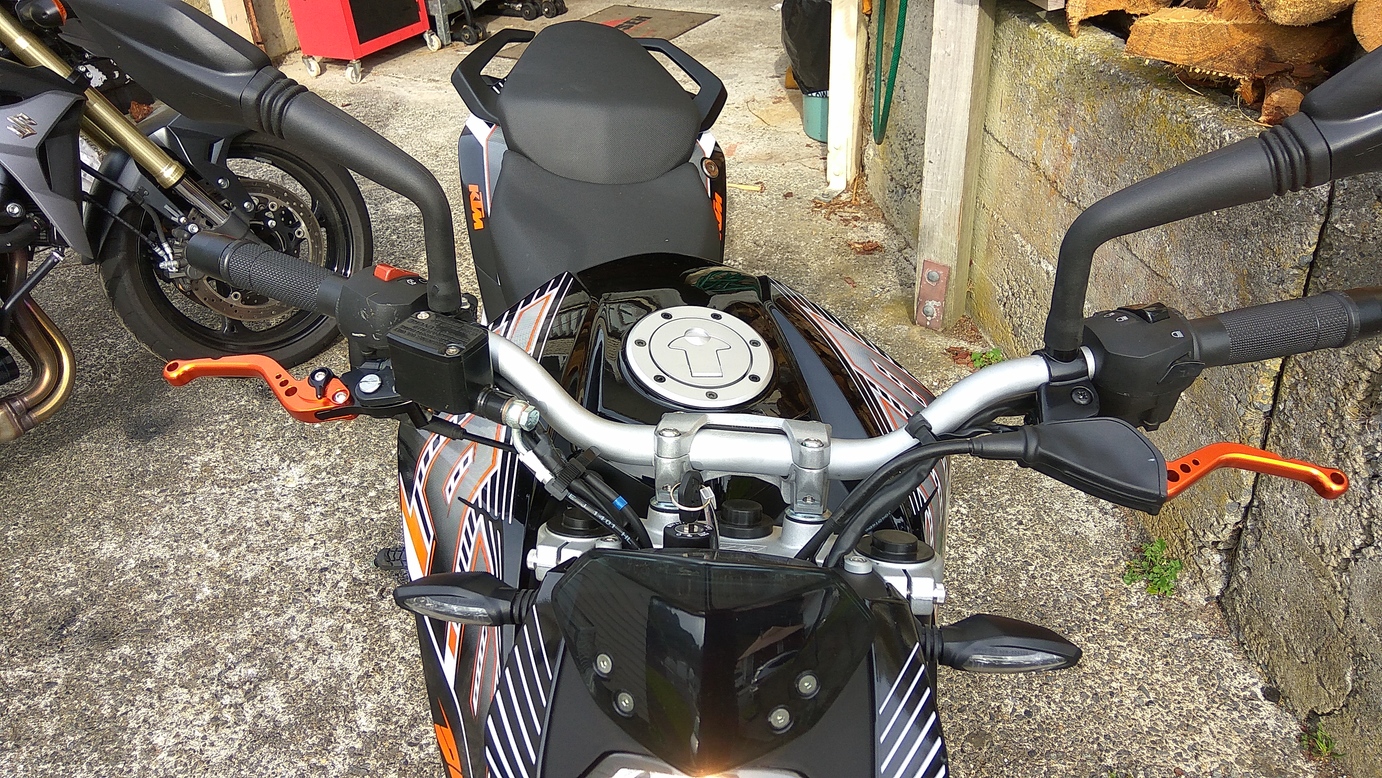 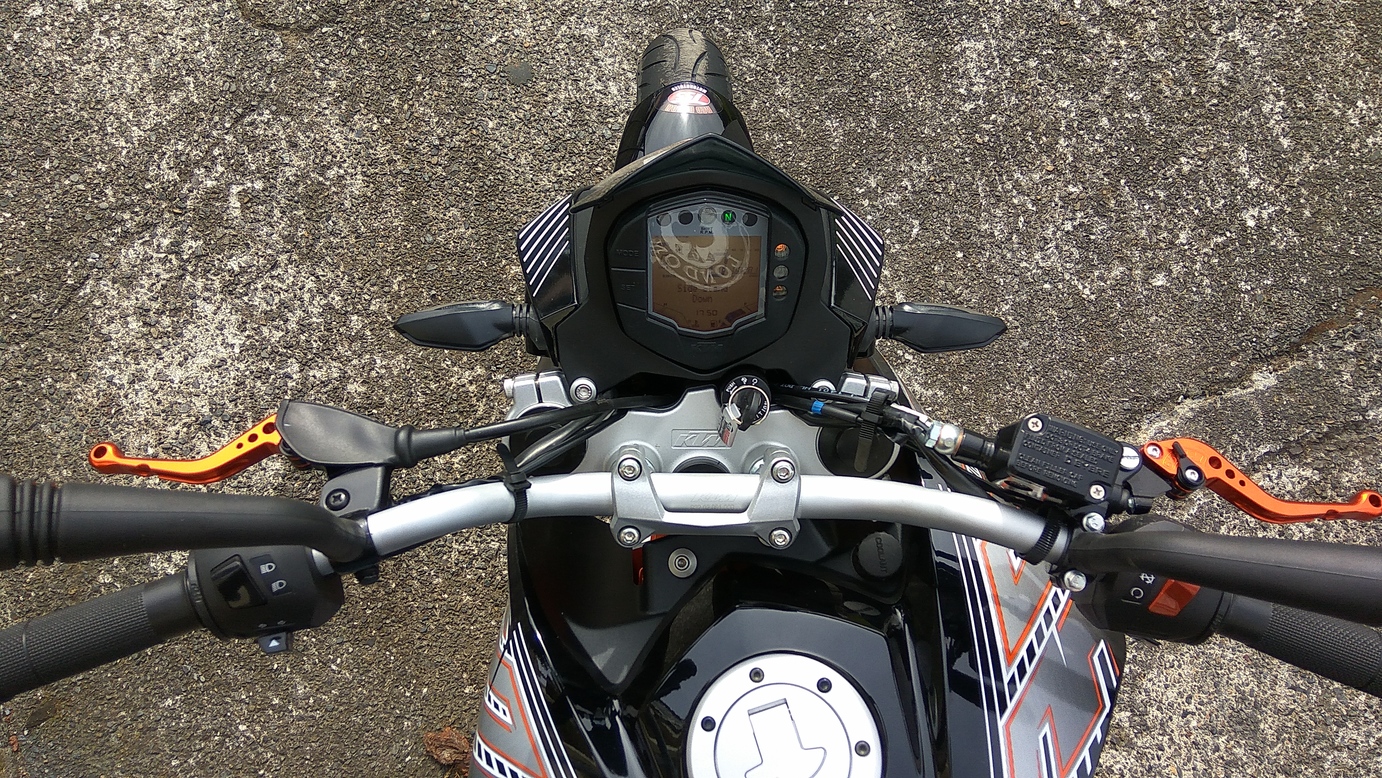